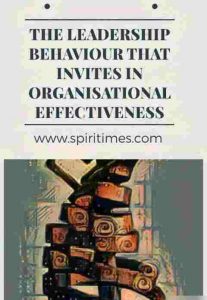 EFFECTIVE CHANGE OR TRANSFORMATIONAL LEADERSHIP IS NOT ABOUT ROSY RHETORICS, BUT ABOUT THE BEHAVIOUR OF THE LEADER.

A change often means a threat of loss. Thus, fear of losing colleagues, familiar working practices and routines, predictability and even employment, set up resistance to change. It is the behaviour of the leader that would get his people to align emotionally to his vision and agenda.

Organisations create unfavourable environment for change and innovation by the following means: suspicion over new ideas from subordinates, unnecessary chains of approval, setting departments or individuals against each other over their proposals and picking the survivor, unbalanced criticism that is not tempered with praise, equating problem identification to failure, to lull themselves into the illusion that everything is alright, micromanaging and tightly controlling everything, making decisions in secret and unleashing them on their people to keep them in check, tight restrictions on information, getting lower-level managers to quickly implement threatening decisions like job cuts and transfers and boasting of top managers who nurture the delusion that they know everything about their business.

People prefer to learn to change rather than to be changed.

A Chief Executive often creates change by developing a vision for the future, crafting strategies to bring that vision to fruition, dealing with the incidentals stringing along and galvanising his people to focus on the same agendas and goals, often termed as emotional alignment.

Effective change or transformational leadership is not about rosy rhetorics, but about the behaviour of the leader. The manner with which he relates with his people on an individual level, his dress code and how he exemplifies his true values and assumptions and so forth sets the tone for the culture of his organisation. Short-term thinking often goads the top management of an organisation into undermining their much touted people-oriented values. Hurriedly making a section of their workforce redundant is a means of accomplishing this. Thus, they create an organisation peopled by unmotivated doubtful employees who view the rest of the organisational values with suspicion. Such an unconstructive state jeopardises the strategic direction setting process of the organisation.

Effective leadership focuses on processes, not on individual personal qualities. Real change leaders are true to their strengths and weaknesses. They harness their abilities and those of their colleagues to create effective processes. The key skill of listening helps him or her into greater self-knowledge. Many analysts believe that the downfall of Margaret Thatcher in the 1990s was linked to her tendency to ignore the advice of her cabinet. Her success in the Falklands War secured to her the international reputation of “iron lady.” She appeared to believe that she was infallible which eventually led to her downfall.