An organisation to be successful keeps in full view the characteristics of effective teams.

Organisational workgroups or teams to be judged are placed alongside their performance outcomes and achievements. With a clear focus on team goals or outcomes, team leaders can cognitively analyse and effect to improve groups. The characteristics of effective teams are categorised into seven sections.

Clear team goals define the performance objectives to be achieved. When there is no question at issue about team goals, when team goals are very clear, it enables one to ascertain if the performance objectives have been achieved. This wisdom stands out amongst the characteristics of effective teams. Failure is often a sequel to giving a group a vague task and asking them to flesh out the details. Effective goals are those that are involving or motivating; they are goals that members consider worthwhile and important. Replacing group goals with personal agendas or power issues also gives failure to teams. Keeping the team focused on the goal puts to the proof effective team leadership.

Effective teams embrace a sound structure suited to accomplish their unique goals. Teams or work groups have different assigned responsibilities. Consequently, they need to find the best structure to accomplish their goals. Top management teams characteristically deal with power and influence; task forces; ideas and plans; customer service teams; clients; and production teams, technology. Pursuant to problem resolution, teams need a structure steeped in a trust that motivates members to willingly contribute ideas. A Creative team like an advertising one is effective with a structure of autonomy that permits risk-taking and cuts out undue censorship, while tactical teams like emergency room teams require clarity that sets out each member task unambiguously. Along with these, having clear roles for team members, a good communication system, methods to assess individual performance and an emphasis on fact-based judgements are associated with an effective team structure. An appropriate structure meets the needs of the group and inspires them to accomplish their goals. Taking to this salient aspect of the characteristics of effective teams announces success. 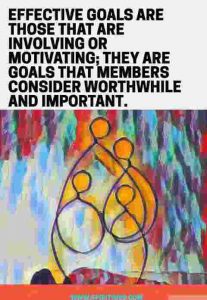 The right number and mix of members prop a team up to accomplish its goals. Under the necessity of becoming or remaining competent, team members require sufficient information, education and training. The requisite technical competence, in a comprehensive sense, is crucial for accomplishing team goals. In the nature of success for teams, are core competencies like technical skills, interpersonal skills, the ability and willingness to do the work as well as problem-solving ability, openness, supportiveness, action orientation and a positive personal style. Core competencies like technical and interpersonal skills radiate forth from the core of the characteristics of effective teams.

A sense of unity and identification hallmarks excellent teams. For this state to present itself, teams need to be carefully designed and developed. Involving members in all aspects of team processes helps in entrenching a strong team spirit.

Coordinating in harmony the individual contributions of team members helps to invite in success. To build a collaborative climate, where members can stay problem focused, be open with one another, listen to each other, feel free to take risks and be willing to compensate for each other, trust based on honesty, openness, consistency and respect is considered crucial. The specific and unique roles of team members draw out a performance that contributes to the overall team success and effectiveness. The ability to coordinate and synchronise their individual contributions is found within the boundaries of the characteristics of effective teams. It is up to team leaders to cultivate a collaborative climate. This spirit of cooperation is often engendered by making communication safe, by demanding and rewarding collaborative behaviours, by guiding the team’s problem-solving efforts and by tempering one’s ego and control tendencies.

Effective group functioning rises in the wake of effective group norms. For actions to be coordinated and tasks to be completed, it is crucial to moderate team members performance. When the parent organisation or the team itself sets up normative standards of excellence, members will be encouraged to pursue sterling performance as they will constantly feel the pressure to perform at their highest levels. Clear and concrete standards make it easy for members to perform to it. With the intention of facilitating this process, a team leader makes the expectations clear, reviews results and provides feedback to resolve performance issues, acknowledges superior performance and rewards results. Forth goes success when effective team norms are mined from the characteristics of effective teams.