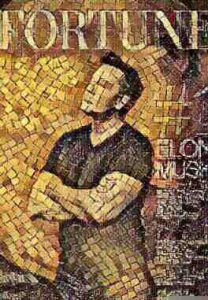 Going along with the operating code of Elon Musk will certainly give you the inspiration to cherish.

Elon Musk wants you to give occasion to resilience and never give up. It is of vital importance to like what you are doing. If you hold dear what you’re doing, you will find yourself thinking about it even when you are not working; it is something your mind is drawn to. Even if you are the best of the best in your field, you cannot always escape the probability of failing at your efforts. Doing what you love gets you and your enthusiasm immune to the discouragement associated with failure and also builds up your resilience. When Elon Musk wanted to start a rocket company, a good friend of his attempted to discourage him from it by collecting a whole series of videos about rockets blowing up and then screening them before him. In the end, Elon Musk’s enthusiasm won and spurred him to proceed with the project.

Now is the time to think bold and take risks. As you get older, your obligations increases, especially the ones you owe to your family. Having a family means that all the risk that you are taking not only touches on you but also bears on your family. When you have a family, it becomes much harder and costlier to do things that might not work out. Elon Musk is encouraging you to take that risk now before your obligations increases. Think bold and big; you won’t regret it.

If your goal is important enough, you should give it a good try, even if there is a high chance of failure. Although Elon Musk had doubts about the success of Tesla Motors, he proceeded ahead with the project because he believed that he was trying to solve a very important problem. Amongst other things, Elon Musk also wanted to address a common false perception that electric cars were ugly, slow and boring like a golf car.

Focus on Signal over Noise. Spending money on things that don’t make your product or service better is a trait of a confused company. At Tesla Motors, Elon Musk entrenched the idea of not spending money on any advertising campaign. He rather guided their resources into research and development (R&D), manufacturing and designs, all geared to make their car as good as possible. A company should ensure that all their efforts and spending are leading to a better product or service. All efforts not yielding such results should be discontinued.

Problem solvers are a great asset to any organisation. To be able to describe at multiple levels how a problem was resolved is a true mark of a genuine problem solver. One never forgets a problem that he has grappled hard to solve.

Draw towards your company great people. This is especially important when you are starting a new company. Do everything in your power to gather great people if you are creating a company. The company is just a group of people who have gathered together to create a product or service. So, their success depends on how talented, cohesive and well-focused they are. If you are interviewing for a job, it is equally important to do it with a company that you respect.

You stand in need of working very hard if you are starting a company and if you want to succeed at it. When Elon Musk and his brother were starting their first company, they went to a small office for rent rather than getting an apartment. They slept on the couch and showered at YMCA. With the only computer available to them, he coded at night, seven days a week. Work hard every waking hour and associate with supportive people like Elon Musk’s girlfriend who had to sleep in their office in order to be with him during the early years. To utilise every opportunity in your waking hour to work hard, especially if you are starting a company is crucial to success. A situation, where somebody is putting in 50 hours of work per week; and you, 100 hours on the same thing, will see you accomplishing twice as much as the other person in the course of the years.

You can choose not to be ordinary. You can choose not to abide by the conventions of the world. Rise and be not afraid of new arenas; get a book; learn something new; experiment with your hands and make something happen; just showing up is winning half the battle; do not be afraid of failure. Stand in with the courage to innovate, but do not delude and lie to yourself when something is not working. Always tell yourself the truth in order to avoid being fixated on the wrong solution to a problem.

Vamp up your mindset and decide to do things differently provided the new way is better. Set off to advantage your motions and think beyond the normal stuff. In that way, you will achieve your objectives, pay your bills and release more funds for further innovation.

Banish the tendency for wishful thinking and stay focused on something that you are confident will provide a high value for others. Being rigorous in making that assessment sets you apart from wishful thinkers. Furbish up your beliefs in your realistic ideas and stick to them tenaciously rather than pursuing an unrealistic dream that has no merit. Then, work as if there’s no tomorrow. Elon Musk subscribes to Edison’s convictions that it is really about 1% inspiration and 99% perspiration.

According to Elon Musk, if you need inspiring words to do anything, don’t do it. You are probably not wired to do that thing.

Elon Musk’s way is all about making a clean break with the usual way of thinking and doing things, and then, embracing new frontiers of thought.