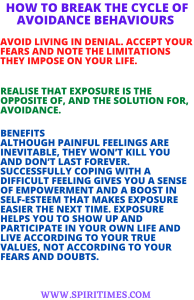 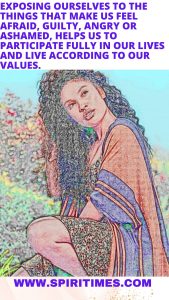 Mary felt distressed amid crowds. Groups larger than four or five people, started her feeling smothered, short of breath, vulnerable, scrutinized, exposed, and confused as she tried to keep track of everyone who might be in trouble or dangerous or critical of her. How to break the cycle of avoidance behaviours weighed on her mind.

As a smart person with a good fund of psychological buzzwords, she excused her avoidance of crowds by saying, “I’m too empathetic and intuitive for my own good. My boundaries are porous, and large groups overwhelm my ability to process all the inputs.” She declared herself to be quiet, introspective, and spiritual, prefering intimate, one-on-one communication, instead of consorting with throngs of people.

Of a truth, Mary was simply paralyzed in any large gathering. In the short term, she avoided the paralyzed feeling by staying off committees, not joining large organizations, avoiding big parties, and arranging her social life so that she dealt with friends and family one or two at a time. “How to break the cycle of avoidance behaviours, must have a solution that can free me from limitations,” she thought. She closed her eyes, drumming on her chest with her fingers.

In the long term, she suffered some serious consequences. She missed her sister’s wedding, and didn’t see her daughter in her high school play.

When her husband eventually got her to Italy, she scarcely saw it in daylight. The thought of the crowds frightened and immobilised her. She holed up in the hotel room with a “headache,” frequented the smaller, shabbier sidewalk cafés, and roamed the cobblestone streets alone at night. “Loneliness will get the better of me if I don’t discover the answer to how to break the cycle of avoidance behaviours.”

In Rome she missed Saint Peter’s Basilica, the Coliseum, and Michelangelo’s Sistine Chapel ceiling. In Florence and Venice it was the same story. The sad truth was, Mary was taking a pass on a lot of her own life.

In the short term, she avoided an unpleasant feeling in the moment. Soon enough she faced the likelihood of the same feeling rearing up again, and she tried to avoid it again. Clearly, her life was on hold over the long term. The depth, height, and reach of her existence was limited by her day-after-day, week-after-week, year-after-year attempts to avoid feelings that are, ultimately, unavoidable.

Buckling Up To Exposure, Solution To Avoidance

When Mary realised that exposure is the opposite of, and the solution for, avoidance, she stopped avoiding painful feelings and started to actually experience the things that make her feel afraid, depressed, guilty, ashamed, or angry. As she lived fully and participated in her own life, she began to to get out of the vicious cycle of short-term avoidance and long-term disaster. “Now, I can kick the question of how to break the cycle of avoidance behaviours. Mary smiled, nodding her head.

Accepting her feelings, coping with the inevitable ups and downs of emotion, helped her move forward in life on her own terms. For her, the benefits of exposure were threefold. First, she realised that although painful feelings are inevitable, they won’t kill her and they don’t last forever. Second, successfully coping with a difficult feeling gave her a sense of empowerment and a boost in self-esteem that makes exposure easier the next time. Third, and most importantly, she knew that she was showing up and participating in her own life and living according to her true values, not according to her fears and doubts.