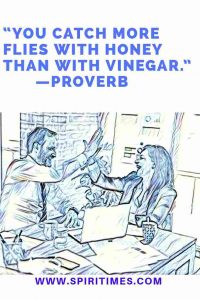 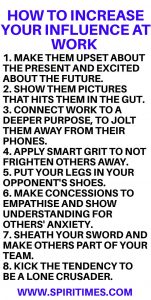 When we hone our ability to gain the support of others, we get more done at work. Bosses, subordinates, peers, colleagues, partners, often control the resources we need; information, expertise, money, staff, political cover. Clear with, how to increase your influence at work and become a top performer hinges on advocacy, teamwork, collaboration. Our awareness of others’ concerns coupled with our ability to convince enables us to have lasting impact.

Again, top performers advocate for their goals by going beyond rational arguments, to evoke others’ emotions. In addition, they deploy smart grit, to circumvent resistance. Shedding more light upon, Professor Angela Duckworth demonstrated that grit, perseverance, and passion for long-term goals distinguishes successful people from others.1

1. Make Them Upset About The Present And Excited About The Future

We can inspire others by fostering both negative and positive emotions. Fleshing this out in advocating for a new proposal, you can render your bosses fearful of the current state that reveals that the company is falling behind the competition, and joyful about the future prospect of keeping existing customers and adding revenues from new online customers. These emotions can line up in your favour and draw support for your proposal.

As well, positive arousal emotions to evoke about a desirable future state or your goal, headline as joy, excitement, passion, thrill, ecstasy, delight. Striking a balance between the differing emotions helps you to advance the cause of your goal or proposal. Advocating for a proposal that sparks fury about a future state, and nostalgia about the status quo, will not number you among top performers.

2. Show Them Pictures That Hits Them In The Gut

We can accomplish this by using photos, videos, artifacts, and demonstrations to dramatise our arguments and stir up emotions. Reciting brutal facts and making rational arguments often ratchets up skepticism. So, to advance our goals or proposals, it is wise to show, not tell.

Illustrating further, in 2009, celebrity chef Jamie Oliver towed this line, to convince residents of Huntington, West Virginia, to eat healthy. He directed a giant truck into a parking lot, the venue of a meeting of parents and kids. The truck dumped a massive load of pure animal fat into a huge dumpster before them. Microphone in hand, Oliver yelled, “this is the fat consumed by the entire school for one year.” He jumped on top of the mound of disgusting fat, grabbed a chunk and held it up. “Come feel it,” he cried, eyes lighting from one child to the another.

“Nooo!” screamed the kids in return.

Gazing at the aghast parents, Oliver lifted a hunk of ugly fat into the air. “Are you fine with this?”

Oliver’s eyes roved about the crowd. “You need to know I’m on your side. Parents will you support me?”

3. Connect Work To A Deeper Purpose, To Jolt Them Away From Their Phones

When you present your proposal in a way that connects work to a deeper purpose, you energise others and pique their interest. We can use purpose to inspire others to commit to our goals and projects. For instance, if you are working in a company with a purpose to save lives, you can employ not only dense numbers and facts, but also pictures or videos, to link your proposal to an overreaching or deeper purpose. How the work that you are proposing, contributes to the purpose of saving lives, is good to explore here. To make others feel the purpose, motivates them to try harder to help you achieve your goals.5 Shining the light of purpose helps you contract ideas of how to increase your influence at work.

4. Apply Smart Grit, To Not Frighten Others Away

5. Put Your Legs In Your Opponent’s Shoes

The first step in overcoming opposition is to understand why your opponents are threatening your ideas or proposals. When you see the situation from their point of view, you gain some insight about what their opposition is based on. The capacity to understand another’s perspective or mental state, to put yourself in his place, helps you to advance your agenda effectively.6

In view of this, keeping down your obsession with your own concerns and objectives, is good to practice when you are trying to sell your ideas. Instead of pummelling them with more facts and arguments to make them get it, elect to see things from their perspective. Taking the time to see the issue from others’ point of view, helps you to figure out what their considerations are. Then, you can take steps to surmount them. With this, you keep with notions at the core of how to increase your influence at work.

6. Make Concessions To Empathise And Show Understanding For Others’ Anxiety

To appease opposing members, to make concessions, shows that you understand their anxiety over the issue at hand, and helps you to move your venture forward. It is constructive to find a middle ground, to give in a little bit, to silence the naysayers, whenever you can.

7. Sheath Your Sword And Make Others Part Of Your Team

It is constructive to keep down the tendency to pull out our swords and charge into battle when confronted by opponents. For good with, making others part of our project, serves our own interest better. To accomplish this, understand their constraints, and avoid making unnecessary demands. On the same idea, President Lyndon B. Johnson quipped about an opponent. “It’s probably better to have him inside the tent pissing out, than outside pissing in.”7

8. Kick The Tendency To Be A Lone Crusader

Enlist the help of others to keep from being a lone crusader for your efforts. You perform better when you mobilise others to help you advocate or plead for your venture. Doing otherwise, going at it alone, doing all the convincing by yourself, exhausts you.

How to increase your influence at work turns on ideas that help you to inspire others to become advocates of your cause or goals. By deploying smart grit, seeing issues from the others’ perspective, creating vivid images of consequences and expected desirable outcomes, and linking work to a deep purpose, we render work more engaging for everyone. The workplace becomes a more enjoyable setting as adversaries turn to friends.

4. A November 2008 article by Mike Stobbe named Huntington the “fattest” and “unhealthiest” city in America. Mike Stobbe, “Appalachian Town Shrugs at Poorest Health Ranking,” Herald-Dispatch, November 16, 2008, accessed February 24, 2017,http://www.herald-dispatch.com/news/appalachian-town-shrugs-at-pooresthealth-ranking/article_c50a30c5-f55c-5a3a-8fad-2285c119e104.html. This statement was based on 2006 data from the Centers for Disease Control and Prevention.

7. It is unclear whether President Johnson really said this or whether the journalist David Halberstam quoted or paraphrased him. It was in reference to Johnson resigning himself to the difficulty of firing J. Edgar Hoover as FBI director. David Halberstam, “The Vantage Point; Perspectives of the Presidency 1963–1969. By Lyndon Baines Johnson. Illustrated. 636 pp. New York: Holt, Rinehart and Winston. $15,” New York Times, October 31, 1971.