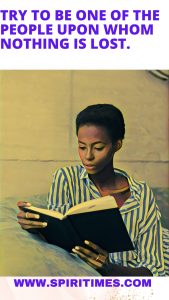 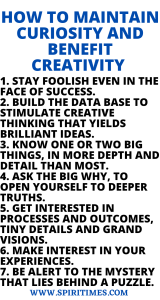 A society that believes in progress, innovation, and creativity cultivates curiosity. Its most valuable asset show as the inquiring mind of its people. Being active, inquiring, imaginative, and full of ideas and curiosity often translates into a cascade of prosperity for individuals, companies, and nations. Following on, how to maintain curiosity merits attention.

As we become truly curious, we not only follow procedures competently or respond to requests, but also cultivate a strong intrinsic desire to learn, solve problems, and ask penetrating questions. In addition, we stimulate ourselves more to make creative connections between different fields, of the kind that lead to new ideas. More, we prime ourselves suited to work in multidisciplinary teams, and stave off the threat of intelligent machines stealing our jobs.

How To Maintain Curiosity Headlines

1. Stay Foolish Even In The Face Of Success

Being vigilant in the face of success proves wise, as success often starts us looking inwards, ceasing to be interested in ideas beyond our own borders. During the long bull run of success enjoyed after the return of Steve Jobs, Apple maintained its pursuit of innovation partly because of the white-hot intensity of its chief executive’s curiosity. Thoroughly conscious ignorance is often the forerunner of every real advance in science, politics, business or the arts. Companies, rulers or individuals, who learn to cultivate their conscious ignorance, to be fascinated, even obsessed, by what they don’t know, feature as the ones least likely to be caught unaware by change.

2. Build The Data Base To Stimulate Creative Thinking That Yields Brilliant Ideas

To better address any project or task that requires creative thought, we need to ground ourselves in deep knowledge of the task at hand and general background knowledge of the culture in which it and its users or readers or viewers live. A mind flaunting these two types of knowledge shows itself a fertile source for the unplanned collisions that lead to brilliant ideas. New knowledge is assimilated better, and has more creative possibility, when it joins a bigger store of existing knowledge. Knowledge gravitates to, and loves knowledge.

Further, as we develop the habit of being curious, we carefully cultivate our long-term memories. In consequence, we tend to live in an enhanced reality where everything we see is overlaid with additional meaning and possibility. This phenomenon is enhanced as we take the facts we have gathered and look at them from different angles, combining them with other facts, constantly seeking new interesting relationships. A situation where nothing fits, no insights present themselves, and everything we have learned is in a meaningless jumble in our minds, marks the beginning of the next phase.

In this later phase, having done the hard work of thinking, insight is now allowed to surface from the unconscious. This insight is assisted only by the stimulation of something completely irrelevant to the task at hand. Insights arise from the gathering and working over, the slow deliberate, patient accumulation of knowledge. Clearly, how to maintain curiosity beautifies our minds with insights.

3. Know One Or Two Big Things And Know Them In More Depth and Detail Than Most

To truly ignite knowledge, it is crucial to know one or two big things, and to know them in more depth and detail than most of your contemporaries, and to think about it from a variety of diverse perspectives.

Again, collaborating fruitfully with people who have different specializations adds in. For example, Charles Darwin’s deep expertise in biology and his reading of economist Thomas Malthus, enabled him to rise above other naturalists and construct an overarching theory of life. It is constructive to read beyond your own field, and frame and reframe the information you receive. Combining deep skills in a specialty, with a broad understanding of other disciplines, allows us to execute projects requiring particular expertise, and see contextual links to other disciplines.

4. Ask The Big “Why?” To open Yourself To Deeper Truths

Knowing what, is crucial to making decisions. However, it is important to ask why, as it is part of what makes us human. When we stop asking why, we remain blind to deeper truths like what our adversary is really asking of us. Monitoring our environment, making requests, and following instructions are not enough.

Else, curiosity plays a big role in various aspects of our lives. Here is a story that puts a construction on its role in negotiations. A business man was negotiating with another company to purchase an ingredient for a new health care product. Though the two firms had agreed on price, they deadlocked on exclusivity. One would not accept the other’s demand that the ingredient not be sold to any of their competitors. This deadlock was resolved by asking a simple “why?” This question started the supplier revealing that exclusivity will get him to violate a supply agreement with his own cousin.

Forward, this information helped them wrap up the agreement. The supplier would provide exclusivity with the exception of a few hundred pounds annually to the cousin. Thinking hard about the possibility of unknowns worths some good. In plain, how to maintain curiosity, starts us getting to unknowns and making a dash at progress.

5. Get Interested In Processes and Outcomes, Tiny Details and Grand Visions

Stephen P. Jobs, touted as a visionary, also obsessed over details. He thought differently about the future of personal computers, only after tinkering with the Apple Mac’s forerunner, the Alto, at PARC (Palo Alto Research Centre).

Fittingly, the people that instigate our biggest ideas are usually detail freaks. Next off, when you open the pages of the “Origin of Species” by Charles Darwin, you will find no booming declarations of intellectual revolution. Instead, what you will find are pages upon pages on the breeding of dogs and horses. Darwin’s world changing idea rose organically out of his empirical observation. Likewise, Adam Smith’s “The Wealth of Nations,” boasts of a closely observed account of a pin factory, before any mention of the invisible hand of the market.

6. Make Interest In Your Experiences

By paying attention to common mundane things like a can of milk, hand dryers, parking garage roofs, we reveal hidden interest, significance, beauty. Instead of going about chasing after experiences, discover what is interesting in the experiences you have. This trait of the curious frequently yields benefits. Clasping on, Hazel Hutchinson, Henry James’ biographer, remarked that most of James’ novels grew out of anecdotes told to him by friends. He took away the tidbit and chewed it over, working out the reason why the people involved behaved in the way that they did. Here is his advice to young writers. “Try to be one of the people upon whom nothing is lost.”

Similarly, Andy Warhol took the most ubiquitous and boring object like a can of soup, and made millions of people see it anew. Things seem boring because we are not paying attention to them. When we become experience-focused, we enjoy our task better. For good, how to maintain curiosity helps us up to more fulfillment.

Also, as couples, we enhance our happiness by replenishing the stock of novelty in our lives, pursuing activities that involve learning or achieving something together. This does not mean a frantic search for utterly new experiences, but becoming better at finding interest in the mundane joint activities of everyday life, like cooking, child care, DIY.

7. Be Alert To The Mystery That Lies Behind A Puzzle

A puzzle is something that stirs our curiosity until we solve it. In contrast, a mystery never stops inviting inquiry. Oftentimes, our instinct is to treat a new problem as a puzzle: what’s the answer? However, after gathering the information we need to solve it, we can uncover the mystery in the problem. A passing interest can transform into a lifelong passion. Hence, when you chance upon a puzzle of any kind, be alert to the mystery that lies behind it. That mystery can occupy and entertain you long after the puzzle is solved.

As we pursue more mysteries, we gather more knowledge and heighten our intellectual, creative, and cultural range. Puzzles have definite answers, are orderly, have a beginning and end. In contrast, mysteries are murkier, less neat, posing questions that can’t be answered. The answers to mysteries depend on a highly complex and interrelated set of factors, both known and unknown. Questions to puzzles feature as how many? Or Where? Those of mysteries, why? Or How? For example, the question “where is Osama Bin Laden?” was a puzzle. When it was solved, there was a great jubilation. “How best to combat religious extremism and terrorism?” a much more important question, is a mystery receiving far less attention, amid the public and media, because of its complexity.

How to maintain curiosity goes beyond finding answers to a puzzle, to transforming the puzzle into an enduring mystery igniting a lifelong passion. Doing this helps us to gather more knowledge that broadens our cultural, intellectual and creative range.