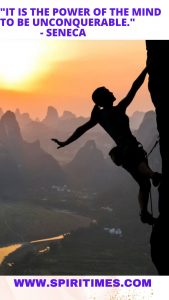 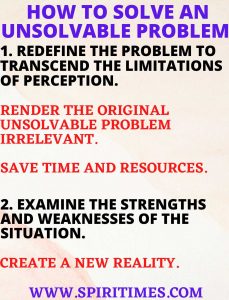 Further, reframing a problem shows that we are not accepting the perceptions of our environment, as limitations to be accommodated. Redefining the situation stimulates us to act in accord with the newly-created reality. Oftentimes, just telling ourselves or others something different to change our beliefs is enough.

Here Spotlights How To Solve An Unsolvable Problem

1. Redefine The Problem To Transcend The Limitations Of Perception

When Alexander the great was readying to penetrate the core of the Persian empire, he had to secure his needed supplies. To do this, he had to secure water routes from from Greece to the coasts and rivers of Persia. Darius III King of Persia commanded a formidable navy of about 200 veteran war ships, compared to Alexander’s small coastal fleet and food-carrying barges. A problem stared Alexander in the face. How could he protect his food supply from the hovering threat of the Persian navy?

Forward, he had neither the time nor the financial resources to build a fleet. Gathering data to understand his enemy, the Persian fleet, he unearthed their key weakness, the need for fresh water. He reckoned that if he secured all sources of fresh water within the vicinity of his food barges’ routes, he could safeguard his supply. Next, he garrisoned all the subject sources of fresh water, and poisoned those they could not control.

Making Pregnable What Is Impregnable

Then he marched down the coast of modern-day Lebanon, to the island city of Tyre. Tyre had aquifers that supplied it with unlimited fresh water, part of which it sold to the Persian fleet. Alexander needed to control the water supply of Tyre or convince them not to sell to the Persians.

After the Tyrians rebuffed his diplomacy, he commanded his engineers and soldiers to build a mole over half a mile long. His men all took up shovels and baskets, and dumped their load into the ocean. Steadily, they filled in the gap of water between the mainland and the city. Through the completed causeway, he laid seige on the fortified island as though it was a city on land. In about two weeks, it fell, and the Persian fleet was rendered ineffective. Alexander reframed his problem in a way that rendered pregnable what was impregnable. When he looked at Tyre, he saw land instead of an island. Triumphantly, he marched on to Egypt.

2. Examine The Strengths And Weaknesses Of The Situation

How U. S. Steel Recasted A Problem To Solve It

In modern times, U. S. Steel reenacted a similar feat. The residue of its coking operations posed an environmental problem at one of its mills. In spite of being enormously expensive, the remediation could still fail. The awareness of the strengths and weaknesses of the situation inspired someone to reframe the problem. This problem reframer discovered that there was a small residual energy content in the waste. Mixing it in small amounts with the fuel for the furnaces helped the company to eliminate the potential environmental problem. They achieved this by recasting the problem from containment to fuel.

How to solve an unsolvable problem requires us restructuring it into an opportunity to use our strengths or avoid our weaknesses. Doing this increases the odds for success, and maximises our resources.