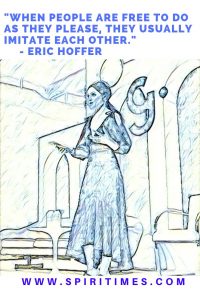 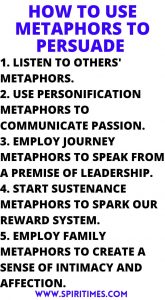 Metaphors often plant ideas in our instinctive minds. There, they take root and grow, spreading around, affecting the way we think, feel, and act. Effective leadership metaphors speak directly to our instinctive mind’s two supreme needs: safety and reward. Clearly, metaphors are crucial elements in the language of leadership. In this, honing how to use metaphors to persuade, spotlights crucial.

Further, a metaphor is basically a substitution. To use metaphor is to substitute one thing for something else. For instance, if I say to you, “I’m at crossroads.” That means that my life equates to a journey. This is the image I present, an image that would influence the direction on of our conversation. These are all metaphors. The credit crunch. Winter of discontent. Financial storm. Metaphors establish a particular image for discussion, making other people more likely to offer certain viewpoints, than others. Reasoning from, mafia capos describe FBI informers as rats. In return, the FBI talks about stamping out criminals.

Similarly, vermin metaphors populate the language of genocides Jews were described as snakes in Nazi Germany; Tutsi, cocroaches in Rwanda. These images are powerful and they have persuasive effect. Metaphors affect attitudes, values, and behaviours. The aggressive language of healthcare like jabs and shots, reveals a metaphor of war with ourselves, that often puts us off. On the other hand, the use of war imagery galvanizes and keeps health workers focused. Fighting cancer. Getting the equipment to the front line.

Forward, Here Is How To Use Metaphors To Persuade.

1. Listen To Others’ Metaphors

To win others over, start by paying attention to their metaphors. Others’ Metaphors give you an insight into their worldview, an insight helpful in winning them over. For instance, if a company executive says to you, that they want to unlock the communication potential of their board, you might explain that the key comes from mastering the language of metaphors. This shows that you share their perspective, that they can feel safe with you, that both of you are on the same side.

2. Use Personification Metaphors To Communicate Passion

Frequently, when we feel affection for something, we use the metaphor of personification. For example, excited home owners talk about the heart of the house; excited gardeners, plants being thirsty; excited executives, the spine of a speech.

Plus, when our metaphors refer to bodily actions, we literally get into people’s head. Illustrating with, a leader saying, “this organisation has real bite or we must grasp this opportunity, has his or her people visualising the act of biting or grasping. In effect, they activate the part of their brain associated with these tasks. Personification brings in a personal quality. An entrepreneur reeling from hard times, can communicate clearly to his people with a personification metaphor. “We’d got flabby and need to lose weight.” To establish personality in objects, brands or companies, brings them back to life, and helps people love them. Clearly, how to use metaphors to persuade plays a key role here.

3. Employ Journey Metaphors To Speak From A Premise Of Leadership

When you as a leader describes a journey, you speak from a premise of leadership. In essence, you demonstrate that you see the path ahead. Just as, Barack Obama, in his 2008 victory speech, demonstrated this. “The road ahead will be long. Our climb will be steep. We may not get there in one year, or even one term, but America – I have never been more hopeful than I am tonight that we will get there. I promise you: we as a people will get there.” journey metaphors activates the brain’s reward system. Since people can visualise where they are going, they know when they are making progress. This progress is rewarded with little squirts of dopamine along the way. In plain, how to use metaphors to persuade revolves around the clarity it brings in.

More, we can use weather metaphors to boost journey metaphors, and bring more power and clarity to them. In this mould, Gordon Brown amid Britain’s 2010 general election said, “Whilst we have come through the worst of this dreadful storm, the waters are still choppy. We have got through this storm together, but there are still substantial risks ahead. It’s about having the courage to set your mission and the courage to take tough decisions and stick to them without being blown off course. We are weathering the storm. Now is no time to turn back. We will hold to our course and we will complete this mission.” Here, Brown positioned himself as captain of a ship sailing stormy waters. Metaphor often influences response.

The prospect of food and water starts our reward system going. Hence, they provide us with powerful metaphors. As we go on our journey, we need food to eat and water to drink. Further with, information sounds more appealing when we see it as water trickling down, streaming or flowing. Information can also be food. We are all aware of Apple Computers and the Macintosh. The Macintosh is actually a type of apple common in North America.

Following on, with the metaphorical image of an apple, the literal reality of walking around with your office in your folder appears not just attractive, but enticing. In this, metaphors can transform our perception. As well, money can be water, when banks talk about pools of liquidity or cash flow. With this, they convey the message that money is essential for our survival. Money can also be food, when we start speaking of dough or bread. Similarly, ideas can also be food, when we see ideas as tasty, delicious or mouth-watering.

5. Employ Family Metaphors To Create A Sense Of Intimacy And Affection

As a leader, you can use this metaphor to entice others into the warmth of family. The government is the father. Also, we have founding fathers, sister organisations. The BBC is aunty Beeb. We can flip the metaphor for good effect. Following this, David Cameron warned that breaking up the United Kingdom would be like a painful divorce, to discourage the drive for Scottish independence.

Awareness of metaphors starts us avoiding saying things that might inadvertently leave people feeling bad about themselves or the organisation. Moreover, noticing the various metaphors that others use, makes it easy for you to speak in a way that fits in with their worldview. This paves way for you to influence and win them over. As a leader, it is your responsibility to mediate and find new common metaphors that works for everyone. In this, how to use metaphors to persuade, is not scarce in the arsenal of effective leaders.