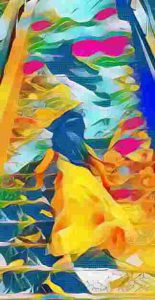 IN PARTNERSHIP LEADERSHIP, THE EFFECTIVE LEADER NURTURES THE CONNECTION BETWEEN HER AND HER PEOPLE IN A MANNER THAT APPROXIMATELY BALANCES THE POWER BETWEEN THEM, SHUNNING AUTHORITARIANISM AND EMBRACING SHARED DECISION-MAKING.

An effective leader treats her people as if they are her customers and creates a flexible work environment, where trust for her people is not lacking. Thus, she inspires confidence and support needed to achieve organisational goals, amongst her people. Operating from the principle of shared power and accountability on which partnership leadership is founded, she acts in a way that causes others to respond in a shared direction and does not hesitate to take the blame for any shortfall.

Leadership is often viewed as a long-term relationship, or partnership, between leaders and team members. In partnership leadership, the effective leader nurtures the connection between her and her people in a manner that approximately balances the power between them, shunning authoritarianism and embracing shared decision-making.

Conscientiously, she articulates a widely accepted vision with the input of all workers in all the rungs of the organisation. Sharing accountability with her people for the success or failure of their organisation, she cultivates a corporate culture that encourages the people to air contrary opinions. In a partnership leadership arrangement, where power is shared, people are more likely, to tell the truth, because they feel less vulnerable. When leadership becomes a partnership, the organisation is rewarded with collectivists, staffs who put the welfare of the group above their own, pro-organisational and trustworthy people.

In 1997, Rose Marie Bravo took over as the Chief Executive of Burberry Group PLC, a dull British raincoat maker. As a leader, she took certain notable steps and turned the fortunes of the company around. She did that by encouraging an open attitude that supported the fact that a business idea can come from anywhere. Consideration for her people including those on the front lines was quite prominent on her agenda. She encouraged the management to get the point of view of all staff before setting an agenda. Not resting on one’s laurels, reinventing of the self every day and unrelentingly getting oneself up to conceive of new ways of captivating the customers, were things that she believed in. The crucial benefits of teamwork were not lost on her, as she surrounded herself with the best people available, to gear up the effective execution of accepted ideas. Reliance on a formula just because it worked for another company did not fly with her.