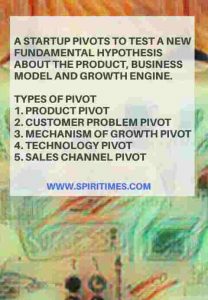 A Startup pivot strategy begins to take shape at the launch of its current product. Through the metrics generated by the interaction of the customers with the product, the startup secures to itself what it needs to know about the desirability of the product. The validated learning helps it to determine whether it needs to persevere, to stay on its current course, or to pivot away, to turn to a new strategy.

A pivot is about altering a product, in line with what has been learnt, to adapt it to a different purpose that would create more value for its customers. Hence, a Startup pivot strategy  is not about jettisoning everything that came before and starting over.

A Startup gets up a pivot, a special kind of change contrived to test a new fundamental hypothesis about the product, business model and growth engine.

In a pivot, a single feature could pull through and become the whole product, and a whole product could become a single feature serving a complementary function. It could also take the form of a Startup turning to a different segment of customers that find its product more valuable, compared to the original customer segment targeted by its business plan. A pivot is also expedient in a situation where a Startup discovers that the problem anticipated in its business plan pales in comparison to other customer-related problems; in this scenario, it could reposition its existing product or create a new one to solve the more important problem. The sales channel is the mechanism through which a company delivers its products to its customers. In a channel pivot, the startup smartens up to deliver with greater effectiveness the same basic solution through a different simplified channel. This is exemplified by a company that sets aside complex sales processes to sell directly to its customers. A mechanism of growth pivot could find a Startup veering off from the paid advertisement to the viral growth model where customers are encouraged to spread the word about the product and recruit others. A technology pivot sees a company through to a better technology that would facilitate the achievement of its goals. In general, a startup pivot strategy encourages innovation that guarantees the survival of the company.

A pivot is sponsored by a new strategic hypothesis that should be tested with a minimum value product (MVP) or a simple product prototype. To survive in a dynamic world, a company must continue to pivot despite its successes.