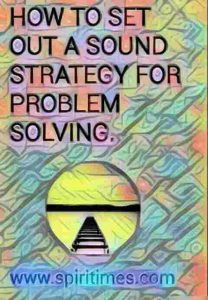 STRATEGY FOR PROBLEM SOLVING PROCEEDS TO PRACTICALIZE AND MATERIALISE WHAT IT ENVISIONS FOR SOLVING A PROBLEM THROUGH ACTIONS, COORDINATING AND CUMULATIVE ACTIONS THAT BUILD UP A CONSTRUCTIVE MOMENTUM AND FOCUSES THE COMPANY’S OR AN INDIVIDUAL’S ENERGY AND RESOURCES EFFECTIVELY. THE COHERENT ACTIONS MUST NOT CONFLICT WITH EACH OTHER AND FOLLOWS A PRIORITIZING OF CHOICES AND OBJECTIVES.

Often in business, the problem or challenge worth attending to is dealing with change and competition. Diagnosing the specific structure of the challenge, not naming performance goals, is the first stage of crafting an effective strategy for problem  solving. The second step favours thinking up a guiding idea or policy, for surmounting the problem, that levers the organisation into an advantageous position. Implementing the chosen guiding policy or idea by a set of coherent actions and resource allocations is the final step of an effective strategy.

Every now and then in a large organisation, the competitive problems that keep it back are internal, like stifling bureaucracy, outdated routines, factions of entrenched interests and lack of cooperation across departments. In other companies, the challenge could be how to deepen competitive advantage by expanding the boundaries of the firm’s capabilities.

A diagnosis defines and classifies a situation or problem, revealing patterns and highlighting areas or issues that need more attention than others. A certain type of problem classification sets the organisation to know about how a similar problem was solved in the past. A diagnosis also reveals certain factors that can be used to evaluate the entire strategy for problem solving and adapt it to changes outside and within the organisation.

In 2008, Starbucks was suffering from the malaise of declining same-store traffic growth and lower profit margins. This challenging situation could be diagnosed as a problem in managing expectations, a need for new growth platforms or an eroding competitive advantage. These perspectives are not actions but each suggests a range of preferred actions that might be executed in disregard of other actions considered less relevant. Thus, a diagnosis keeps at it until it gets up a judgement about the meaning of facts. A diagnosis simplifies and names the crucial aspects of reality to facilitate problem solving.

A guiding policy or idea sets itself to work at fashioning out an overall approach for surmounting the problem highlighted by the diagnosis. It guides an organisation towards a certain direction without outlining exactly what needs to be done, defining a way of dealing with the problem and setting aside other alternatives. A strategy is about the purpose and the method of actualizing that purpose to lever an organisation into an advantageous position. To anticipate the actions and reactions of others, to simplify reality, to harness the leverage found in concentrating effort on a pivotal or decisive aspect of the situation and to create policies and actions that are coherent and supportive of each other, are all means employed by a guiding policy to create advantages. It clears all lingering uncertainties about what to do, how to compete, and how to organise.

A neighbourhood grocer could simplify the problem confronting her outfit into choosing between serving the more budget-conscious students or the more time-conscious professionals. Her guiding policy could read as follows: “focus on the busy professionals with minimal time for cooking.” A guiding policy harmonises actions and resource allocations, creating coordinated and concentrated actions.

Strategy for problem solving proceeds to practicalize and materialise what it envisions for solving a problem through actions, coordinating and cumulative actions that build up a constructive momentum and focuses the company’s or an individual’s energy and resources effectively. The coherent actions must not conflict with each other and must follow a prioritizing of choices and objectives. In 1999, Ford acquired Volvo, Jaguar, Land Rover and Aston Martin to leverage on their strong brand names. However, The action of buying Volvo and Jaguar and the action of putting both of them on the same platform conflicted with each other because putting them on the same platform diluted the brand equity of both marques and displeased their customers, dealers and service shops.