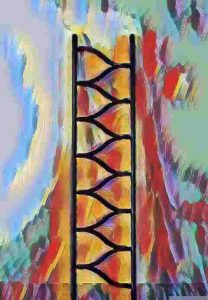 POINT TO NOTE, TRANSFORMATIONAL LEADERSHIP PRACTICE PORTIONS OUT INTO SEVERAL ASPECTS CAPABLE OF BUILDING UP THE CREDIBILITY OF AN ORGANISATION.

Given to the process of engaging with others and creating a connection that raises the level of motivation and morality in both the leader and the follower, the transformational leadership practice defines a leader who is attentive to the needs and motives of the followers and tries to help them to reach their fullest potential. Classic examples of transformational leaders are Mohandas Gandhi and Martin Luther King Junior. These leaders raised the hopes and demands of millions of people and in the process were changed themselves. The approach adopted by these transformational leaders is quite different from the exchange dimension of transactional leadership. This exchange dimension is well-illustrated in a situation where teachers reward students with grades for work completed and where managers offer promotions to employees who surpass their goals. In the corporate world, a manager who attempts to change his or her company’s corporate values to reflect a balanced standard of fairness and justice is exhibiting a principle of transformational leadership practice. This process may put both manager and followers up to emerge with a stronger and higher set of moral values.

At a venture, transformational leadership practice sees to motivating followers to do more than expected. The following means are often employed by the transformational leader: highlighting the importance and value of specified and idealised goals in a manner that sticks it to the consciousness of the followers, motivating their followers to move beyond self-interest into organisation or team interests and inspiring their followers to take to higher-level needs like aligning themselves to their true authentic values.

As role models for their followers, transformational leaders often exhibit a very high standard of moral and ethical conduct and dependability for doing the right things. Their vision and sense of mission further bolster the trust and respect reposed on them by their subordinates. Leaders with the charismatic factor are those who make others want to follow the vision they put forward. Nelson Mandela, the first non-white president of South-Africa, typifies such a leader. His high moral standards and vision for a new South-Africa coupled with the people’s response to it brought about a monumental change in their nation.

To communicate high expectations to their followers and to motivate them to become committed to the shared vision of the organisation are important aspects of transformational leadership practice. A sales manager demonstrates these aspects when he uses encouraging words and pep talks to motivate his or her sales force to excel in their work. Noteworthy would be a mention of the integral role they play in the future growth of the company.

Transformational leaders stimulate their people to stand in with creativity and innovation. Pursuing all-sided growth by challenging their beliefs and values as well as those of the leader and the organisation is what they advocate for their people. They lend foundation to new approaches and innovative ways of dealing with organisational issues, developed by their subordinates. Problem-solving at an individual level for the benefit of the whole organisation is promoted by this leader.

To make the most of effectiveness, transformational leaders create a conducive atmosphere for their people to vent their individual needs. As coaches and teachers, they assist their people to become fully actualised. To achieve this end, they often use the agency of delegation, caring designed to meet individual needs or highly structured directives.

The offshoot of transformational leadership is a performance that goes well beyond what is expected. On the other hand, the upshot of transactional leadership is expected outcomes and specified rewards. The idea to individualise the needs of the subordinates and focus on their personal development is not something that transactional leaders concern themselves with. Rather, they hold with exchanging things of value with their subordinates for their own as well as their subordinates’ interests. The people permit his or her influence because of the immediate gains that he or she afford them. On another note, leadership that involves corrective criticism, negative feedback and negative reinforcement is classed under the management-by-exception model. Here, the leader closely monitors subordinates for mistakes or rule violations and then applies corrective action. A passive application of this model is where a supervisor or manager rates an employee poorly in a performance evaluation without ever broaching the issue of the employee’s poor performance. On the far side of ineffectiveness is the laissez–faire leader. This leader finds it difficult to get through the task of leadership because of his or her habit of delaying decisions, giving no feedback and making little effort to help followers to satisfy their needs.

In all situations, even in times of uncertainty, transformational leaders prove themselves trustworthy, reliable and predictable. To articulate a vision and remain steadfast to it, even in uncertain times, is to build trust. A healthy organisation is characterized by a trustworthy leader.

To do the constructive, transformational leaders put in execution change. As change agents, they listen to opposing viewpoints within the organisation and also pay close attention to the threats lurking outside. They also encourage an objective assessment of the effectiveness of their organisation in meeting their goals. To entertain alternative viewpoints of how other organisations work and solve problems and to encourage the comparison of the performance of their organisation that of other companies based on a wide range of economic and non-economic indices are also part of the means they employ to effect change. In other situations, they generate instability and uncertainty that engender change by nurturing the expression of discordant viewpoints.

Transformational leaders are purveyors of change that secures great value to all stakeholders within and outside the organisation.